Are you looking for unique wedding entertainment that everyone will love? Watch Rich DeSimone perform as the legendary entertainer we all know and love. The Frank Sinatra Show with Rich DeSimone is the perfect addition to your wedding.

In 1964, Rich DeSimone was born in New York City in the Bronx. His dad had a passion for music which helped spark Rich’s own love for music. His dad introduced him and four siblings to musicals, Gilbert & Sullivan, comedy records and albums from all the big crooners of the day. Rich was surrounded by music from a young age and it influenced him to become a performer himself. In addition to this, he played the guitar and sang in a church folk group for several of his teenage years. This was the beginning of him performing live. 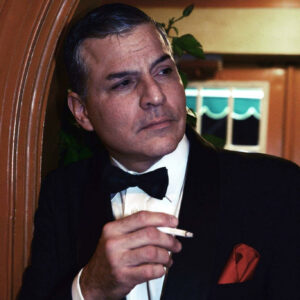 Later in his twenties, Rich joined a few community theatre groups and performed in several productions. These included shows such as, Fiddler on the Roof, My Fair Lady, The HMS PINAFORE, Little Mary Sunshine and as Harold Hill in The Music Man. Rich’s love for Sinatra started once he listened to Sinatra’s Live at the Sands concert featuring Count Basey. Rich started learning songs for his own pleasure. Soon enough “quite a few folks out there” heard of his “new hobby”. People started requesting Rich to perform at their parties and events. This how his performing journey all began!

About The Frank Sinatra Show 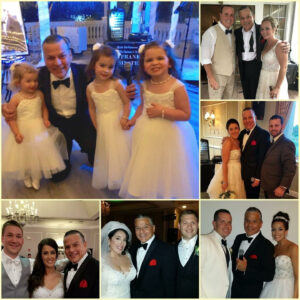 With over 23 years of experience, Rich DeSimone knows a thing or two about performing. He’s performed at all kinds of events for all kinds of people. With a glass of Jack in one hand and a mic in the other, Rich performs a true Sinatra show. Not only does Rich fit the look, he has an amazing voice! He sings all the classic Sinatra songs with ease. Both you and guests alike will be amazed at Rich DeSimone’s talent and stage presence. Everyone will be talking about your unique wedding entertainment for years to come. You can tell that Rich loves what he does. He knows how to connect with the people he’s performing to and will give you a performance to remember.

We asked Rich DeSimone a few more questions about his experiences performing over the years.

1.  What’s your favorite part about your job?

“My favorite part of this “job” is meeting so many people over the years. I’ve seen children grow from families that regularly come to the many restaurants I perform at.”

Rich DeSimone can perform at any event! In addition to this, Rich regularly performs at several restaurants in Pennsylvania. You can find his event schedule here.

2. What’s one of your favorite memories?

“One of my favorite memories is when I was asked to perform for the Philadelphia Phillies on the field for Italian Heritage Day.”

We included a video clip of this performance! Be sure to check out his website to see more performances from Rich DeSimone.

3. What’s the best part about performing at weddings?

“The best part of performing at weddings is the fact that I was chosen to play a big part at a special family celebration.”