In March of 2020, so many aspects of life felt a shift as the Covid-19 pandemic took hold. Industries everywhere were affected and some businesses began work from home. Not all industries are adaptive to working from home though. The wedding and event industry took a major hit as parties were shut down due to coronavirus restrictions. Caterers, photographers, florists, wedding planners, videographers, and more were now out of business for the foreseeable future. Everything came to an abrupt halt. That is, until the surge of micro weddings.

An Inside Look from Tim Sudall of Allure Films

For Tim Sudall, president and owner of Allure Films, he knew that in order to keep his business running, he would have to pivot. Tim was able to see everything up close and personal from his clients to his friends in the industry. As President of the National Association of Catering and Events Philadelphia chapter, Tim saw the industry begin to falter. However, there was hope within him and his colleagues.

Learning to Work Together Within the Industry

Those who would normally rival each other began to work together on plans for future weddings. No one knew what the future held, but they all knew that the best way to move forward was to move as one group. Tim began to see people doing more than just planning weddings. Caterers donated food to frontline workers, while decorators used their materials to make masks and face shields. Photographers also shot “porch shoots” for couples and families. However, that still left anxious couples struggling to plan their weddings.

Love Conquers Bad Timing with the Introduction of Micro Weddings

Some of these couples, however, were determined to get married in 2020. These couples had a set plan, some that they had been working on for up to years at a time. Brides found their wedding dresses, couples chose their bridal party members, and all other details were sorted out. It felt like so much time went down the drain. As restrictions relaxed more in Pennsylvania, the government allowed small outdoor gatherings. Weddings now had to be reduced from hundreds of guests to under fifty. As wedding professionals did their best to help ease couple’s minds and work with them, Tim began to plan his part.

The Positives of Switching to a Micro Wedding

One of the first micro weddings Tim worked at was for family friends Alli and Jon. Alli and Jon had to change their plans drastically in order to stay on track for their wedding day. They decided to have their wedding in their backyard with a handful of close family and friends. While they were not able to physically have their other guests present, everyone was still able to attend in another way. The couple was excited to live stream their wedding so friends and family all over the world could join the fun. Afterward, Alli and Jon said they were actually able to have more than their original guest list join. They had guests from Florida, Kuwait, and Jamaica attend via Zoom. 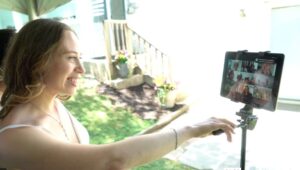 This first micro wedding became the key to wedding videography for Tim. For future weddings, Tim continued his setups to involve Zoom. When we spoke to Tim about changes of the last year, he explained how his mindset changed on the “traditional wedding.” “It’s okay to break the traditional wedding rules,” he told us. In an interview with Alli and Jon, they explained how parts of their wedding were actually better due to the downsizing.

Effects of Downsizing Your Wedding

“It took the stress out of it and was the easiest day we ever had. We were really able to be in the moment and be present. From hearing other people’s experiences, they say that the ceremony goes so fast and then they go right into the reception and they don’t even process what happens. It was really nice that after the ceremony we could talk about it.” 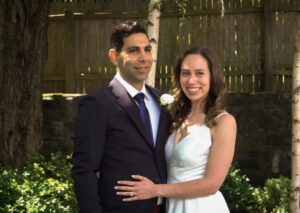 While everyone is eager to get back to big weddings, couples and industry professionals are grateful to do what they can to keep love afloat. During the pandemic, those who planned weddings had a sense of hopelessness, but in Alli and Jon’s case, things actually turned out for the better. Until we can safely get back to large parties, micro weddings are a great alternative that some couples may actually prefer. The use of streaming technology has also changed the traditional wedding. Even in the future for those who cannot attend, Zoom and streaming will still be an option.

Where This Leaves the Wedding Industry

While micro weddings have become a viable wedding option during this time, the industry still feels the hurt of being shut down so quickly. Businesses are struggling to stay afloat. After a year, there is still uncertainty on when large gatherings will exist again and when people will be comfortable hosting them. One thing we know, weddings are always going to happen. People will always gather, and there is hope for the industry. Going forward, how we party may change, but we will always celebrate love.

Let us know your predictions for the future of weddings and your micro wedding stories! Send us a message on Instagram: @philadelphiaweddings! We’d love to hear from you.